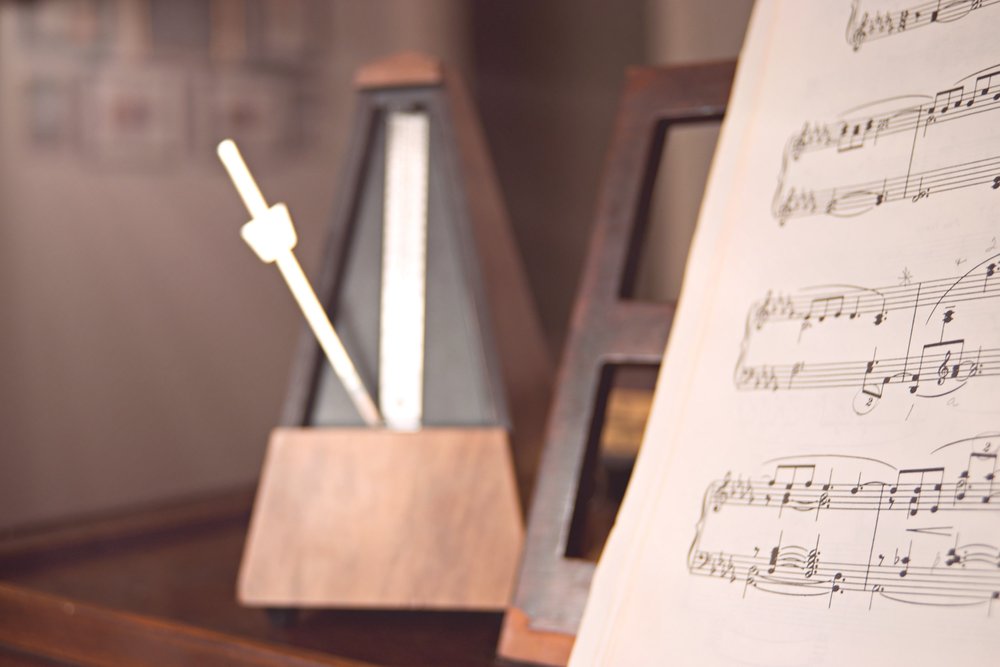 When I was a young musician, I saw an ad in some music rag from a guy proclaiming people only practiced out of fear.  This fellow had a new system he was hawking that would do away with the need to practice.  My musician pals and I laughed like hell over this.  What that system was, I cannot say.  I don’t think any of us gave him the money to find out.

But, I can say there was a smidge of truth in the “practice, as fear” component.  In college, it was not uncommon for aspiring musicians to spend ten hours a day bent to their instrument in a windowless, airless practice room less in pursuit of perfection, more in fear of failure.

Then there was me, hot for music, but slovenly in practice habit, sloughing off until the last minute when I’d finally slink into a practice room, put in a few hours of playing piano, some of it even spent on my lesson material, and yet, somehow pull it off.

I never fooled my teachers.  They always knew what I was up to.  But I was tolerated, (by my teachers, if not my resentful fellow students,) because I had an inherent musicality that made up somewhat for my lack of discipline, whereas my brethren and sistren in contrary scales had only their perfection.

I was leading a double life, playing gigs at night, already a working musician, partly of necessity, and partly of pure unadulterated fun.  But as I dragged myself off to 8:00 a.m. classes on short sleep, things began to tilt.  The schoolwork was not being done, at least not in the traditional sense.  And yet, it was.  I was learning music, getting my butt kicked on the bandstand, night after night, cheek by hard-earned cheek.  Still, something had to give.  It was eventually suggested that I might leave University, and return when I had a more rigorous work ethic, a better attitude, rather than flunk out.  And so I did.  A sidebar; the Dean of the Music School, became a fan and friend later in life.  He shared with me that though I never did return to the halls of academe, unlike those who matriculated, I was the only one he knew of that stayed a musician.

There is no one-size-fits-all cookie-cutter formula that makes for a musician.  The portions of inspiration and perspiration vary from case to case.

Gifted with some natural proficiency, I’ve often wondered over my ensuing decades in music what I might have become had I applied myself the way a classical concert pianist does.  This was not to be my path.  I was blessed, am blessed, with mentors and teachers at every twist and turn of my life.  From Mrs. Körnfelder, who first gave me five minutes of weekly group piano lesson glory, (anything to get out of fourth-period English with mean ‘ol Miss Graham,) to Frankie Steigler, who introduced me to “popular” music while doing my mom’s hair, to the formidable, inestimable, Bill Crystal, the man who “made me,” a teacher’s teacher on the order of Nadia Boulanger – all of them appeared as I was ready, and each marked me for life.

Then there were the mini-pivotal signposts.  Guys like goateed, pock-marked, porkpie-hatted, Bobby “I play organ” Bynum, who, in a gruff, beautifully wasted voice would say, “Alki, you don’t learn the shit in school.  You learn it drinkin’ out a paper bag, in my car, on a freezin’ night.  And then you go inside and play dat shit.”  True dat, Bobby.  Bad for the liver, good for the story.

I’ve had people who know me shake their head, and smile, and laugh, and when I ask them what they’re laughin’ at, they say, “Well, I know you for the wild man that you are, yet at some point in your life, you must have actually practiced, to be able do what you do.”

No matter how loose I may appear, at some point I did indeed practice.  Still do.  But, when exactly was that?  The simple answer is… well, all of it.

When I started as a kid, I would actually go home during lunch recess, and play piano, maybe squeezing in a sandwich, maybe not.  My mom worked day and night to keep our family together.  She’d be at work, none the wiser, if I raced home to coax music out of my funky old upright piano for fifteen minutes instead of sitting down to a proper lunch.  And when I went home after school, and sat down to play some more before homework, chores, or street play, she listened and praised as long as she could till finally chasing me outside, away from the piano, for some peace and quiet.  I didn’t have to be begged to practice.  I had to be begged to stop.

You see, what I lacked in “fear-based” motivation, I made up for in “love”.  I loved playing.  Not practicing necessarily; playing.

Then, along the way, as my awareness of my surroundings, i.e.; “the competition” widened, the tortoises began catching up to my hare.  My natural talent at the top of the adolescent food chain started to be challenged by usurpers, plodders, steady and dependable practice dummies that were acquiring hard-won skills, leaving my party ass behind.  And I started paying attention.  I realized that if I was going to get better, and stay better, I’d have to earn it with some good ol’-fashioned, put-the-time-in, practice.

Thankfully, the gods gifted me with my first real teacher, a tweedy, straight-laced Protestant Peabody boy, disguising a mischievous, naughty fellow who could by turns send me crying to my mama, pissing me off and igniting a flurry of practice activity that would send me back the next week in a new state of being.  The State of Prepared.  Then he’d drop a cautious crumb of praise my way, before double-loading me up for my next lesson.  This guy knew how to motivate.  His name was Bill Crystal.

Bill didn’t just teach piano.  He taught music.  Bach and the boys, of course.  And jazz.  How to read, and write, a lead sheet.  Chords, and voicings.  And theory.  And composition.  And scales, and scales, and more scales.  Most importantly, he taught all the horses in his stable, “how” to practice.  Practice what you need.  Practice what you already know, too, don’t forget about that, you gotta maintain as well as acquire.  And plow, waist-deep through the endless plateau until waking up one morning you can do the thing you could never do before.  Then begin again, pulling yourself up like Kilroy, just peering over the ledge of the Promised Land.

Pay attention to that word.  Daily.

But why do you have to practice, people have asked me.  You’re already so good!

You want my sage advice about practice?  I guess it is this.

Practice scales with a metronome so your heart beats in time with the heart of God, the Universe.  Practice to make the music that you want to hear.  Practice so that at any moment you can awake from a deep sleep like a Zen warrior and play anything, anywhere, with anybody, in any key.  Practice so that you can play that which you can imagine.  Practice so that Death will have to wait patiently in the corner till you’re done playing your soul’s solo.  Practice because life is a practice; its importance in the doing, not the arriving.  Practice not to get it right.   Practice so you can’t do it wrong.